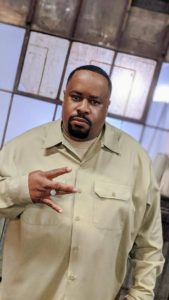 In order to fully understand the character and nature of the One West brand and its founder, the history must be explained.  Let’s discuss the experiences, the influences and the culture from which the One West brand emanated and the man who founded this business.

We all have seen movies and heard music depicting the lifestyle and Hip-Hop culture which emerged from the West Coast. More specifically, areas such as Compton and Long Beach have been the birth places of new genres of music and fashion.

The movie; Straight Outta Compton is one such example, that has given us a glimpse into this colorful history.  Super iconic stars were born there:  Snoop Dogg, Ice Cube, Dr. Dre and Eazy E.  just to name a few.

Many of us have seen documentaries discussing the culture, the emergence of huge gang networks such as the Crips and the Bloods. Through the past three decades much of the behind the scenes history has been exposed.  The artist’s motivation, the overwhelming desire to create fashion, music and movies that would express being part of that culture.

It is necessary to consider the confluence of circumstances; political, social and economic realities from which the One West brand emerged.

The founder and CEO of the One West brand was dramatically impacted and influenced through his exposure (both good and bad) and being involved in all things we associate with Compton, California through such movies and music. Darnell Price became known as “O.G. Cuicide”, his contribution to music, movies and media was cultivated through his direct experience and relationships.

O.G. was blessed to be part of this rich culture and be taught the business by legends in the industry. It is an amazing story that needs to be told.  The One West brand tells the story, celebrates the art and gives O.G. Cuicide the ability to share it with the world through his Radio Broadcast, the Magazine and an incredible Apparel line.

His very first song recorded in “a real studio”, was recorded with the late Mixmaster, Spade in 1987.  From there he continued doing music and appearing in shows. O.G. Cuicide began his exposure by being featured on:  Living on the Edge of Insanity; The Life Album by Toddy Tee. The track was titled United We Stand Divided We Fall.

As the pressure and exposure to a seemingly endless lifestyle high-impact and dangerous circumstances began to wear on O.G. Cuicide he almost gave up!

Around December 31, 1991 O.G Cuicide survived a suicide attempt.  By most people’s standards, this would have literally been it. By the grace of God, this could have easily been an echo of a story all too familiar in Compton during this time.

In 1992 he met R&B singer and songwriter Leon Haywood CEO of Eve Jim Records well known from his hit record released in 1975 (I Want To Do Something Freaky To You) Mr. Haywood signed O.G. to Eve Jim records and became a Mentor as well as a Godfather to him and showed him the music game.

O.G. Cuicide gained experience and knowledge ranging from contracts, publishing and copyrights while recording his album in 1993. He began to do a lot of touring. Through this experience, while in Houston, Texas he worked with artist such as Lil Flip Lil Kano and D Red.

In 1994 he released a maxi single with four (4) tracks associated with Eve Jim Records (Still Flowing) (Bang get it Over With) (Final Exit) (This Shit is Real).

In 1995 O.G. followed up with a full self-titled album Cuicide. Final Exit being the lead track off of the album. The streets loved the album! This album gained significant attention in the overseas market. This opened up the exposure of an international tour; performing in Japan, Germany, France, London, Australia and Switzerland.

In 1996 his contract expired with Eve Jim records and this marked a new career threshold. The true beginning of a professional journey that would demonstrate all the knowledge learned from his legendary Godfather, Mr. Leon Haywood. O.G. Cuicide put this wealth of knowledge, hard work and experience to use. Building as a brand that would continue to grow and expand.

Prior to the death of the late Eazy-E, O.G. Cuicide was negotiating a record deal for Ruthless Records.  In 1996 his contribution to this effort was writing a hook on the One Mo Nigga to Go album by a member of NWA,  Dj Yella. The song was titled 2Two Faced. Into 1998 the studio work began.

O.G. Cuicide signed a three year contract and recorded an album titled ; Wonder Why, that released in 1999 and featured King Tee Big Syke from Thug Life.  Ruthless Records Recording Artists; BG Knocc Out and Gangsta Dresta and from the Comrades Leicy Locc .  This album really gained momentum and took off.

At this point success began to be measured in dollars. O.G. got offered a $350,000 record deal by Priority Records. He turned it down!  O.G. earned his name on the streets and in the industry.

In 2000 touring on the positive response to his Wonder Why album O.G. Cuicide reached an all-time high career bench-mark. His exposure in Japan was remarkable; having features in Wheels Magazine, Lowrider Magazine and Larry Flynt’s publication Rap Pages.

The momentum continued in 2002. Participating with the legendary Jackson Family was an enormous milestone. O.G. Cuicide found himself having the ability to collaborate with the project; film Diamonds from the Bantus. The father of the Jackson family, Mr. Joe Jackson, spear headed this project.

This gave way to O.G. Cuicide recording the title track for the film which had its debut in 2003.  Creating a new business endeavor named  CG records soon followed. This business was also known as Cidal Gang Records and prompted the release of two mix tapes; Go Hard or Go Home, Volume One in 2004. This project was developed with various well-known artists.   Go Hard or Go Home Volume Two was comprised of a double CD.

Now O.G Cuicide is the executive producer and creator the One West Movement and brand. The album single release; Never Give Up is a testament to this man’s career and all things that embody this brand. Songs such as; I’m the Reason, Diamonds from the Bantus, Bare with Me, Death by Association, Triple Death, Neva , and Keep It G express and underscore the mindset, determination and perseverance O.G. Cuicide has shown throughout his life. Having the pleasure to also work with RBX, Bad Azz, K-Bar of 5 Footaz, Warren G, Spider Loc  helped pave the way for the music careers of Swoop G and AD.

The One West brand draws from those years of colorful experiences.  Ups and downs, trials and tribulations, experience and positive influences have all come together in this circumstance to create ONE WEST MAGAZINE, ONE WEST RADIO AND ONE WEST APPAREL.

The sky is the limit here.  These mediums have been created to highlight, illustrate and give people a unique ability to visualize this exciting part of our ever-changing culture.

OG’s Are Forever on Spotify!

OG Cuicide – Never Give Up (Video)